Xiaomi has released an unusual product, namely CyberDog. CyberDog This is a four-legged robot that is similar to a robot dog. CyberDog is powered by Nvidia Jetson Xavier NX AI supercomputer for Embedded. And Edge Systems is paired with a 128GB industrial-grade SSD. The supercomputer comes with AI 21 TOPS performance.

This CyberDog robot also has a camera, microphone, and sensors on the robot’s head that provide spatial perception so that it can be said to be comparable to humans. Those sensors include an AI camera, an ultra-wide camera, and Intel’s RealSense D450 depth camera module that helps the robot achieve centimeter-scale obstacle avoidance and navigation. It also has SLAM mapping and auto-tracking. 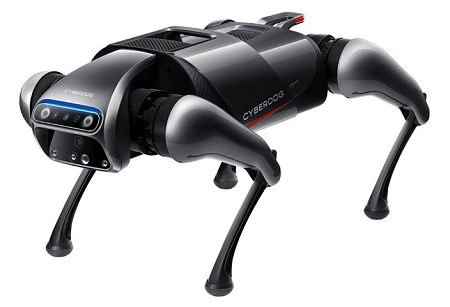 To run this Robot device, you can use the telephone application, voice control, and remote control. And remote control. Only a handful of Xiaomi phones, including the Redmi K40 Gaming Edition, Redmi K40, Redmi K30 5G, Redmi 10X Pro, Redmi 10X, and Mi Mix 2S, can currently use the robot. Xiaomi says it will update the robotic device so that it can be compatible with other devices that can use this Xiaomi robot.

With its self-developed high-performance servo motor, CyberDog has a wide range of movements, including running, jumping, turning, and leaning forward. He can also do backflips, rollover, and stand on his hind legs. This robot has a walking speed of up to 3.2 meters per second (11.52 km / h). And is able to carry a load of 3 kg.

And CyberDog can also be used to control compatible home appliances such as TVs, vacuum cleaners, air conditioners, and air purifiers using Xiaomi’s built-in XiaoAI system in the robot.. The price for the Xiaomi CyberDog is $1,545.56.