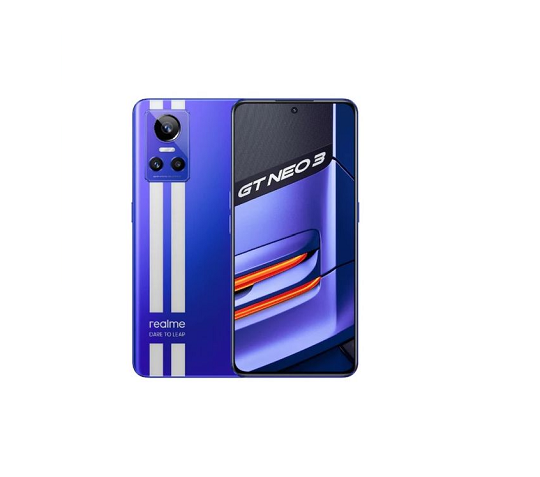 For performance, the Realme GT Neo 3 Smartphone is powered by the Dimensity 8100 chip from MediaTek. The System on Chip (SoC) which is processed with 5 nm fabrication, is paired with the Mali G610 GPU. Realme GT Neo 3 is equipped with 6 GB of LPDDR5 RAM and 128 GB of data storage (UFS 3.1). There is also a larger RAM option, which is 8GB with 256GB of internal memory and 12GB of RAM with 256GB of storage.

Supported by UltraDart Charging 150 watts, the Realme GT Neo3 smartphone is equipped with a 4,500 mAh battery capacity. Realme GT Neo 3 is also available with a larger battery variant, which is 5,000 mAh, but only with 80-watt fast charging support. UltraDart Charging 150 Watt is claimed to be able to charge the Realme GT Neo3 up to 50 percent in just 5 minutes of recharging. The 80-watt output is said to be able to charge the phone from 0 to 100 percent in 32 minutes.

Realme also comes with supporting game activities on mobile phones, namely 4D Game Vibration, which is supported by an X-axis motor. There is also the Diamond Ice Core Cooling Plus cooling system which covers a heat dissipation area of ​​39,606 sq. mm.

For design, on the back of the Realme GT Neo3, it is decorated with a camera module that looks prominent. The cross-section also has two lines that run vertically, accompanied by the tagline “Dare to Leap and the Realme brand.

And the Realme GT Neo3 camera consists of a 50 MP main camera (Sony IMX766) which is supported by optical image stabilization (OIS) and electronic image stabilization (EIS) features. And also has two other cameras, namely an 8 MP ultra-wide camera that offers a 119-degree field of view, and a 2 MP macro camera.