Sharp has just launched its newest smart television product (smart TV) in several countries in Southeast Asia. This Smart TV is named the Aquos DW1X Series, which is a second-generation 8K TV from Sharp Aquos. There are two screen sizes Aquos DW1X, namely 60 inches and 70 inches. Sharp deliberately brings a giant screen on the latest 8K TV (7,680 x 4,320 pixels) so that viewers can really feel the great detail.

The launch of the latest Aquos DW1X Series smart TV coincides with the 20th anniversary of Sharp’s presence. The company states that the Aquos brand can last for decades because it brings some of the latest innovations. In Japan itself, they are developing image quality to provide a great experience.

This Sharp Aquos DW1X Series Smart TV has several new advantages, namely presenting some of the latest hardware and also improvements in the software sector. From the hardware side, there is a technology called UV2A Panel. This technology was developed by Sharp in Japan itself, so it promises high resolution and sharp colors. 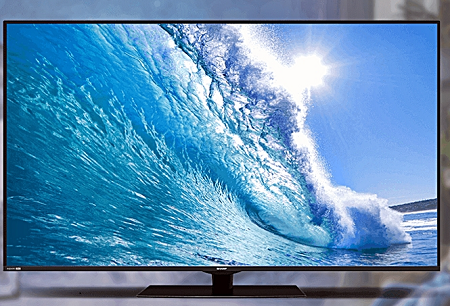 For the chipset processor, there is an image enhancement used in the Aquos DW1X, Z2 Revelation series. This processor is capable of producing high-quality images of up to 8K. Sharp states that this chipset has a CPU speed of up to 20%. And a GPU speed of up to 56% when compared to the previous model.

When this smart TV is mounted on a wall in a bright room or near a window, the image on the large screen will be clearly visible without interference from light reflections. This is thanks to the Low-Reflection Film Coating feature.

There is also Anti-reflection in the light, which can also be overcome with Deep Chroma Display Pro technology. This software is able to make the Aquos DW1X Series display a DCI color gamut of up to 100% and better brightness of up to 167%.

The 8K resolution on the DW1X Series display panel lets you enjoy ultra-high-detail content on YouTube. And can also be used when you want to enjoy movies that don’t have 8K resolution because this smart TV is reinforced with the 8KAI Upconvert feature so that lower resolutions can be shown in 8K without noise interference.

As a smart TV, of course, the Aquos DW1X Series has an operating system, namely Android TV. Sharp said with the OS, and this smart TV is able to access more than 5,000 applications that can be downloaded on the Google Play Store. There’s also an exclusive GameQoo feature so you can stream games from PS4, Xbox, and more on the Aquos DW1X.